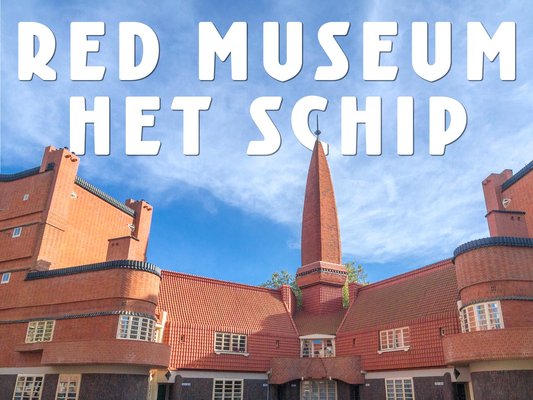 "More beautiful than the palace of the king"

[This is the English translaton of the opinion piece in NRC.]

In 1923, the Japanese architect Sutemi Horiguchi visited the Netherlands and was amazed at the fact that the workers' houses in the Netherlands were more beautiful than the king's palace. The following year he published a book in Japan on Dutch architecture with a lot of attention to the houses that were built in the romantic and expressionist style of the Amsterdam School, mainly by housing corporations.

All over the world there was admiration for social housing in the Netherlands. The inspirer of the Amsterdam School movement, architect Michel de Klerk, was also called the “Rembrandt of architects”. In Amsterdam it was the social democratic councilor Floor Wibaut who made a case here. He felt that the workers should be elevated by becoming acquainted with art and culture.

But is this interest also there in the Netherlands? With the support of housing corporations and the municipality of Amsterdam, Museum Het Schip started a few years ago in Het Schip to promote interest in this Dutch heritage. An important reason for the support of the municipality was the aim to spread tourists more over the city. The museum started in a small post office and was subsequently converted into a museum home. Four years ago, a former school building could also be involved. Mayor Eberhard van der Laan officially opened this extension. The extra museum space made it possible to organize exhibitions about the art of the Amsterdam School and the underlying ideals to help people find a good and beautiful home. The museum has a permanent exhibition and there are also changing exhibitions that place art and architecture in a broader context. There is currently an exhibition about the utopian German architect Bruno Taut. He was heavily influenced by Dutch architecture and built a neighborhood in Berlin in the style of the Amsterdam School: Schillerpark.

Although the name suggests otherwise, the Amsterdam School is not just an Amsterdam affair. Almost every town or village in the Netherlands has buildings from the twenties of the last century that were built in this style. In addition, there are buildings in Indonesia and even in Kemerovo in Siberia. The digital Platform Wendingen, set up by the museum, is busy collecting all these buildings on the internet. In recent years, thanks to Museum Het Schip, interest in the Amsterdam School has grown significantly. Many people now see how beautiful the neighborhood they live in is. In addition, the museum provides inspiration for architects and public housing providers. The principle of designing beautiful homes for people with low incomes is reflected in Dutch architecture.

The advisory committee of the Amsterdam Fund for the Arts (AFK), which had to assess the subsidy application from Museum Het Schip, was therefore very positive and advised allocating the requested amount. Unfortunately this did not happen. Instead, the museum received a substantial discount due to the lack of sufficient financial resources. As a result, the museum has an annual gap of 147,000 euros in its budget. This is not feasible for the museum, because the museum already obtains 65% from its own income. It is also impossible to cut back, because the fixed costs will continue and the museum heritage must be well cared for. Friends of the museum have therefore started a petition in support.