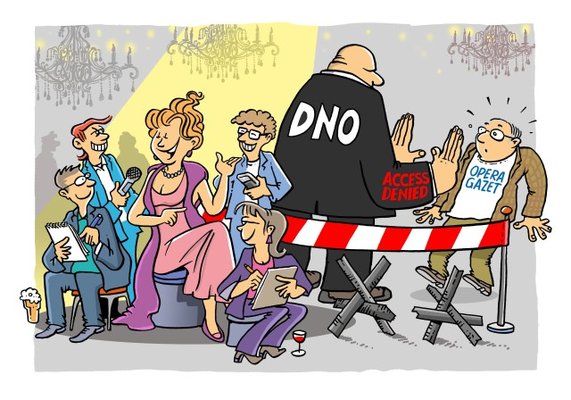 Thea Derks op Contemporary Classical – Thea Derks: "Recently, a petition was launched for the restoration of Olivier Keegel’s press accreditation by Dutch National Opera. They no longer provide press tickets because he fiercely attacked Pierre Audi’s programming on the Flemish blog Operagazet and in the Dutch newspaper Het Parool.

Moreover, he denounced Audi’s predilection for ‘director’s theatre’, in which to his view content falls prey to a far-fetched ‘vision’ of the director.

I often strongly disagree with Keegel. As with his ludicrous crusade against the production Aus Licht around Karlheinz Stockhausen in the coming Holland Festival. Nor do I like the harsh tone of voice in which he formulates his objections. Nevertheless, I signed the petition. Dissenting opinions are necessary for artists and art institutions, for they provide an opportunity to define one’s own mission even more sharply.

Keegel might not find fault with the new production of Richard Wagner’s Tannhäuser. Director Christof Loy closely follows Wagner’s libretto. With subtle gestures he makes the hypocrisy around courtly versus sensual love poignantly perceptible. In doing so, he makes use of mirror effects, as simple as they are inventive. Beneath the neat surface, carnal lust is rampant

First of all, there is the stage setting. For four hours we see the imposing salon of a nineteenth-century gentlemen’s club. It functions as the sultry lovers’ den of Venus and Tannhäuser, as the abode of the fraternity of singers, and even as a church.

During the overture the singers make love to extremely young ballerinas and each other – in tailcoats. Later they react with horror to Tannhäuser’s carefree laudation of sexual intercourse; only thanks to Elisabeth he is not lynched. The message is clear: beneath the neat surface, carnal lust is rampant.

Secondly, there are the costumes. Love goddess Venus (the impressive mezzo-soprano Ekaterina Guberova) wears a voluminous black dress and a glamorous white fur coat. Her earthly rival Elisabeth (the soprano Svetlana Aksenova) is dressed in an equally flamboyant white dress. In the sinister third act she appears in a somewhat shabby black women’s suit. Saint or sinner: two sides of the same coin

When Elisabeth sacrifices her life for Tannhäuser’s salvation, Venus watches over her for minutes. Her posture resembles the painting of Madonna and Child that Elisabeth previously clutched in her arms. In the end, Venus lovingly covers her rival with her white cloak.

Thus Loy once again pinpoints bourgeois morality. For indeed things are never simply black or white: saint or sinner, ascetic or lecher, they are two sides of the same coin. No surprise then that at the end the seductive ballerinas once again throw themselves in the arms of the gentlemen.

Loy further illustrates the ubiquitous hypocrisy in Elisabeth’s ambivalent attitude towards Wolfram (the excellent baritone Björn Bürger). Even while expressing her love for Tannhäuser, she caresses him like a lover. This is reflected in Tannhäuser’s double-hearted behaviour. He finds no satisfaction in the physical lovemaking with Venus, nor in Elisabeth’s chaste love. Unfortunately the tenor Daniel Kirch is not an ideal Tannhäuser, his voice is a little shrill. Graceful cantilenas

Still there is much to enjoy musically. The bass Stephen Milling is an impressive father of Elisabeth, the young soprano Julietta Aleksanyan is a beautiful lyrical shepherd. The DNO Choir is deeply moving in their flawless, subdued interpretations of the Pilgrim’s Choir and the Siren Choir. Also effective are the brass fanfares blasting into the hall from the balconies; you literally imagine yourself to be in the Wartburg. Thus the strings of the Netherlands Philharmonic Orchestra gain extra depth.

The woodwind instruments play a starring role. Many times (bass)clarinet, (alto)oboe and or flute encircle the voices of the singers with graceful cantilenas. The harp also has appealing solo passages in this romantic score by Wagner. Hats off to conductor Marc Albrecht who sustains the tension from beginning to end, keeping the textures transparent even in the loudest fortissimo passages.

In short: a successful production by Tannhäuser. – I’d be very interested to read Olivier Keegel’s opinion.