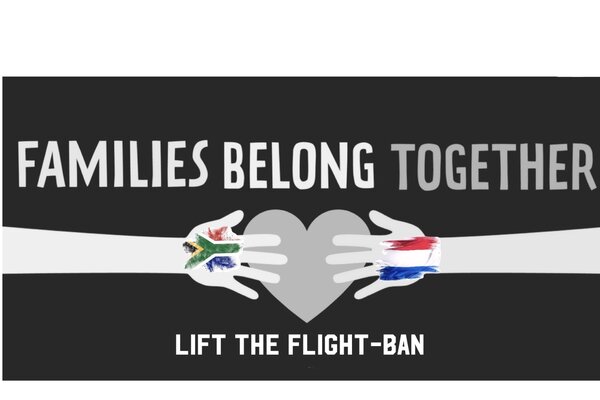 Being together with family is one of the most fundamental human rights and needs. Due to current flightban, thousands of Dutch nationals,EU citizens and Dutch residents have been denied the opportunity to see their South African families, parents and children since the beginning of the pandemic.

EU law (e.g., EU directive 2004/38/EC) calls for equal treatment of EU citizens and their 3rd country family members. The flightban and travelban for close family members goes against the letter and spirit of EU legislation.

We implore the Netherlands government to review and lift their travel ban on South Africa with a focus on the human, mental well being and economical impact that it is causing.

-European Nationals living in the Netherlands with family in South Africa

-Resident living in the Netherlands with family living in South Africa

With the discovery of the new omicron variant by South African scientists on 25 November 2021, the flight-ban and flightban is based on politics, and not on science.

The new Covid-19 variant, Omicron, was present in the Netherlands earlier than previously thought. It was identified in two test samples taken in the Netherlands between 19 and 23 November, which is a week before the variant was first reported by South Africa.

In addition to the Netherlands, the variant has also been found in Belgium, Germany, Italy, Portugal, Austria, the Czech Republic, Denmark, Spain and Sweden, and on Réunion, a French island near Africa. Outside the EU, the omicron variant has also been identified in Botswana, the United Kingdom, Switzerland, Australia, Canada, Israel, Japan and Hong Kong.

The WHO has warned against countries hastily imposing travel restrictions and discriminating against other countries, saying they should look to a "risk-based and scientific approach”.

The Netherlands is so emphatic about discrimination in any form and have made it a criminal offense yet; an entire country, unfairly discriminating against the people from South Africa.

Dutch nationals can freely, without any flight-or travel-bans go on holiday in South Africa and return because of the nationality they hold.

Is this not a double standard and discrimination based on nationality?

Viruses have no nationality!

We ask the Netherlands authorities to respect our fundamental human right. The right to family life. Article 8 of the ECHR protects the right to private and family life.

We implore the Netherlands government to review and honor the EU travelban exemption categories of their flight-ban on South Africa with a focus on the human, mental well being and economical impact that it is causing.